Internet now stable at "crappy" - third attempt at a router running, connection speed approximately mid-nineties dialup rates with ping times pushing anywhere from 200 to 3000ms. (Many thanks to

parrot_knight for help getting this far!)

Today's Armistice Day posts are on the blog; photographs of the Normandy cemeteries and notes on an appropriate, and underrated, book.
I arrived back in the UK a week ago, and have been without internet pretty much constantly since that point. This is beginning to get annoying, though on the plus side it is an effective deterrent to spending money on ebay.

It is unclear whether the cause is the ISP or our hardware - the ISP are the likely suspects, given something similar happened a couple of months ago, but they're dragging their feet about actually working on the problem. So that I can close off the other possibility and thus lean on them some more to fix it, does anyone have a known-to-be-working ADSL router and filter they can lend me for a couple of hours one evening this week?
Another photo, of the sunset from North Bridge last night: 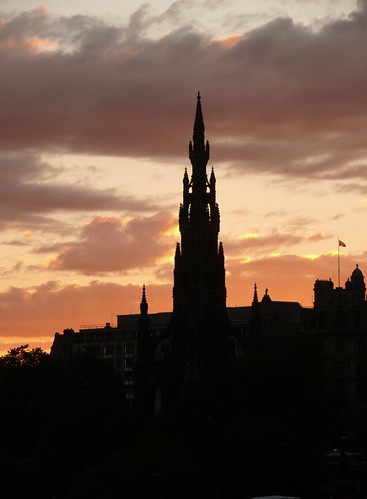 (Alternate version focusing on the Scott Monument)
Three (unmatched) 512-MB sticks of DDR-2 RAM - large DIMMs, suitable for desktop PCs. Two are 533MHz, the other I'm not sure.

Free to a good home, but only if you can claim them before tomorrow evening...
So, I have been promising myself a new bike for approximately six months - the last time I owned an actual new one I was, I think, ten. I keep procrastinating over this, which is getting silly.

So: advice. I want to buy a new, robust, perfectly standard sort of bike for use in getting from A to B over mostly paved roads on a regular basis. I would like, for obvious reasons, to do it in Oxford within walking distance. Before I go and do something on impulse - is there anywhere in particular anyone would recommend buying from, or conversely recommend avoiding like the plague? (Or any other advice, really, but this is the one part I am flying a bit blind on...)

Now, time for the other thing I've been putting off all year - a haircut. Perhaps this is the week for finally getting stuff done.
So, lifting some boxes off the top of a kitchen cupboard yesterday, I found that, for some reason, they seemed to be sticking in place. A good tug and they came away, revealing a layer of quite unpleasant looking black mould which had grown between them and the wall.

The boxes went on the cupboard at the end of November / start of December, so that's two months, maybe two and a half, for it to spring up; I'm guessing they got pressed up against the wall, and then a lack of circulating air over the winter plus condensation on the wall gave good growing conditions.

So, this afternoon, I'll be throwing out the remaining boxes - the contents are fine, there's no food in them, just the outside cardboard is vile - and cleaning the wall. And then, I suppose, start inspecting the rest of the house - where there's one patch there may be a dozen. Bleh. Well, I suppose it's almost time for spring cleaning.

(Any useful advice on dealing with mould? I've usually encountered it on windows and wooden surfaces rather than walls...)
Two posts on the statistical dangers of airline terrorism:The latter one is the more interesting - with the exception of the unusually pacific 1990s, the number of deaths (both in the air and on the ground) attributable to violent activity by passengers on aircraft is basically constant since the 1940s; around 150-200 deaths per billion passenger-flights, or one death per six million passenger-flights.
The discount bookshop on St. Aldates - which has surprisingly good stock, all things told - has something interesting at the moment; copies of both The Yiddish Policeman's Union and The Amazing Adventures of Kavalier and Clay for £2 apiece.

I can recommend both of these fairly unreservedly; they have their flaws, but both are excellent novels and should you have not read either this is as good a pretext as any. I mean, £4, really.
Nothing involved and thoughtful, this year, but I didn't want to not note it. The atmosphere this year is slightly different to previous years; you can feel the gradual drift towards emphasising "and those presently". I suppose this is a cyclic thing...

Last year, I wrote that there are maybe a hundred and fifty thousand people - no doubt less now - in the country who can remember 1918, fuzzily, as little children. Tens of thousands will be old enough to have been permanently touched by it; to remember the awful hushed silences and the drawn curtains along deserted streets, or a strange man, dusty and unshaven, who came to the door one day after the shouting was over, and announced himself as Father.

And, of course, twenty years later they saw it all again; they had grown old enough to be the ones sitting in empty houses, or the ones sitting somewhere grimmer; and, for some, it all came around a third time a generation later, sitting and waiting to have a knock on the door and someone offer condolences for their son.

So, have a little sad music. Mothers, Daughters, Wives; I turned up a copy of this years ago, and have been haunted by it ever since.

(This version, despite being sung in a somewhat different voice to the narrative, seems to work a lot better; the original just doesn't quite seem to have the same emotion in it. This is worse than either, mind you.)
http://www.generalist.org.uk/blog/

Well, that's one task I've been procrastinating over for a while. Now to find all that half-written - well, more half-digested - material and start making it coherent enough to put online.

(The plan is to use this journal for personal material, transfer anything vaguely contentful there, and then use the fact that it exists as encouragement to actually do the vaguely-contentful writing. We shall see...)
Collapse